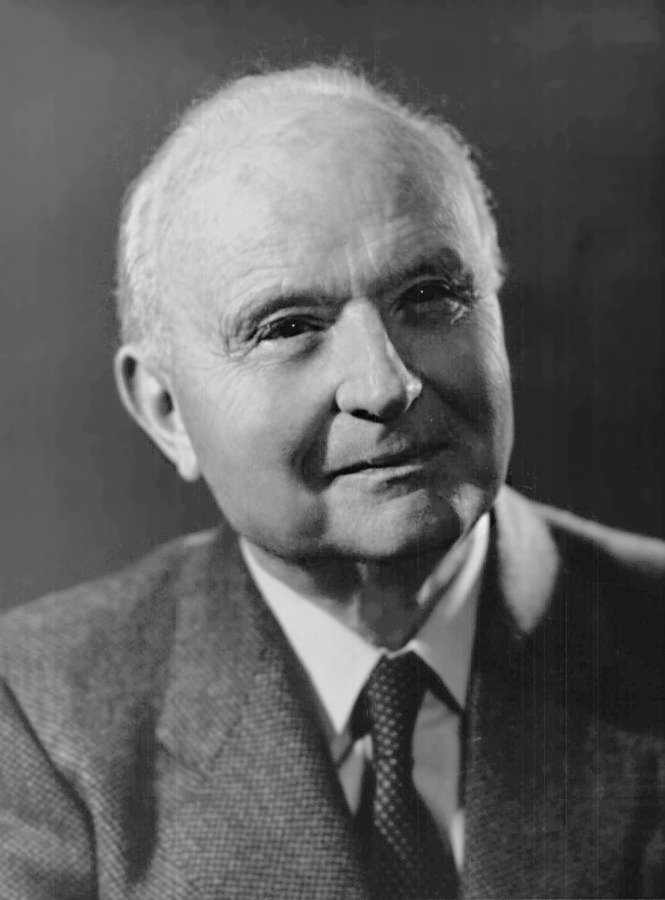 Vittorio Erspamer (1909-1999) has been an Italian pharmacologist, renown mainly for having discovered what later turned out to be one of the most important molecules of the nervous system: the serotonin. As affirmed by the Nobel prize Riva Levi Montalcini, in commemorating him at the press the day of his death, which occurred on October 25, 1999 at the age of 90, Erspamer was a “missed Nobel”, and she had repeatedly proposed him for the Nobel Prize in pharmacology, because of his discovery and his studies on serotonin. At the base of this lack of recognition there is what in the eyes of many scholars, among which I include myself, appears to have been an intellectual “half theft”, half in the sense that perhaps it was not fully aware in the years in which it occurred.

Below I retrace the first studies concerning the discovery of serotonin, taking the opportunity to make available a series of writings difficult to find.

Since the early ’30s, Erspamer has undertaken a series of studies at the Institute of Comparative Anatomy of the University of Pavia, together with Maffo Vialli, then director of that institution; these studies were centred on a particular type of cells recently discovered in the enteric mucous membranes of different animals, called enterochromaffin cells, whose homogeneity in the reaction with silvering and the common presence of internal granulations containing an unknown substance were noted. Since 1933, the research of these two Italian scholars made a fundamental contribution in this regard, highlighting the presence of enterochromaffin cells in the gastric systems of almost all vertebrates, and demonstrating that the substance contained in the granules of these cells was always the same for all animals studied, leaving therefore to understand the existence of a molecule of primary importance (Vialli & Erspamer, 1933a,b). 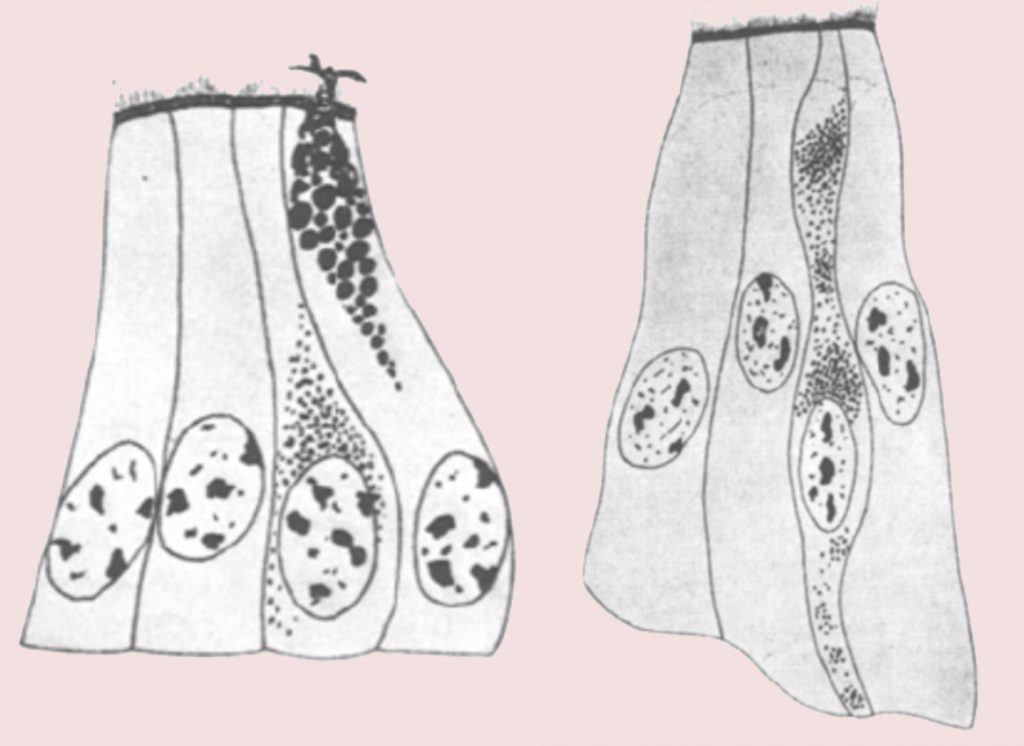 Vialli and Erspamer continued this research, still at the Pavia Institute, and in 1937 they announced the isolation of the substance present in the granules of enterochromaffin cells, recognizing that it was not adrenaline (as previously suspected) and offering results of early pharmacological studies in vitro and in vivo, including the property of contracting the smooth muscle of the mouse uterus. The substance was initially isolated from the enteric system of a frog species, the Discoglossus pictus (Vialli & Erspamer, 1937a,b).

Erspamer took part in a long series of histological, pharmacological and toxicological studies with “his” enteramine, whose results were published in several national and above all international magazines, in German and English, as well as in Italian; a series of publications so extensive as to make it difficult to complete a draft (for an incomplete list of early studies see the bibliography). It is important to note that, since his studies were also published in foreign languages and in well-known scientific journals of international scope, his work was well evident in the global horizon of pharmacological studies.

Eleven years after the first isolation of enteramine by Vialli and Esparmer (occurred in 1937), a team of pharmacists from the Cleveland Clinic Foundation (Ohio, USA), led by Maurice Rapport, isolated a substance from the blood of cow that had a significant vasoconstrictive property, which they called “serotonin”, resulting from a combination of the terms “serum” and “tonic” (Rapport et al., 1948a, b, c).

In 1949 Rapport realized that serotonin was an indolic compound, and he came to hypothesize as a chemical structure that of 5-hydroxytryptamine (Rapport, 1949). On the other hand, that enteramine could have in its structure an indolic nucleus, close to that of bufotenine, was suspected by Vialli and Erspamer seven years before Rapport (Vialli & Erspamer, 1942a); a suspicion that became certain when Erspamer developed comparative studies between enteramine and indole alkaloids of the secretion of the toad bufotenine, bufotenidine and bufotionine (Erspamer, 1946c).

In 1953, the presence of serotonin was discovered in the brains of dogs, mice and rabbits (Twarog & Page, 1953), giving rise to the understanding of its important function in the nervous system of mammals and humans (for a modern historical review see Nichols & Nichols, 2008).

Because enteramine was isolated in 1937, while serotonin was isolated in 1948 (understood as dates of publication of the results of the respective researches), and noted the amount of studies carried out on enteramine in the decade preceding the isolation of serotonin, the substance in question was supposed to be definitively called enteramine. But this did not happen, and within a few years the term enteramine was abandoned in favour of that of serotonin. The reasons for this unjust attribution of nomenclature are probably complex, but it seems quite certain that this was the basis of the lack of the “full” recognition of the pioneering work of Erspamer.

In exposing the events leading to the discovery of serotonin, several authors present partial or inaccurate data, which in fact devalue the scope of the Erspamer study. For example, a common misconception is the stigmatization of the difference between the enteramine of Erspamer, which was isolated from the animals, and the serotonin of Rapport, which would have been isolated in humans, which is not true: Rapport isolated the serotonin from the blood bovine. This imprecise stigmatization seems to be more or less unknowingly used to give an undeserved “added value” to serotonin compared to enteramine.

The erroneous “added value” of serotonin with respect to enteramine would seem to be a constant in both popular and academic pharmacological literature, and this from the early years. Another misconception commonly reported is the fact that the discovery of serotonin occurred almost simultaneously by Erspamer and Rapport. I bring as an example a well-known study of 1954 by the pharmacologists Woolley and Shaw, of the Rockefeller Institute for Medical Research in New York. In exposing the history of the discovery of serotonin, and referring to the fact that “it was the result of two independent lines of work”, they first present the work of Rapport and not that of Erspamer. And when they present the work of the Italian pharmacologist, they do so with inaccurate considerations: “While the work on the identification of the vasoconstrictor of the serum was taking place, Erspamer (1940), in Italy, had carried out research ….”. The “work on serum vasoconstrictor identification” by Rapport occurred 11 years after that of Erspamer, so that “while” is clearly an untruthful forcing. Moreover, as other bibliographic references, late works by Erspamer, dated to 1952, are added, without mentioning the amount of works that, starting from 1937, the Italian scholar had published on enteramine (Woolley & Shaw, 1954, p 122).

Certainly a little disappointed by the lack of the “full” recognition of his twenty-year work with enteramine, Erspamer nevertheless continued his brilliant career as a pharmacologist, and he devoted himself particularly to the study of the active ingredients of amphibians, making important contributions and discoveries of various molecules, such as dermorfins, deltorfins, bombesine and cerulein. He carried out and signed several of these researches with his wife Giuliana Falconieri Espamer, also a pharmacologist.

His team at the University of Pavia was the first to identify in the secretion of Bufo alvarius, the “Sonora toad”, large quantities (up to 16%) of hallucinogenic tryptamine 5-MeO-DMT (Erspamer et al., 1965, 1967). He also promoted the study of frogs of the genus Phyllomedusa (Erspamer et al., 1985), the same genus to which the “sapo” belongs, nowadays better known in the West as “kambo”, ie the Phyllomedusa bicolor. Erspamer’s wife contributed to the identification of some active ingredients present in kambo, including the decapeptide phyllomedusine (Anastasi & Falconieri Erspamer, 1970) and two opioid dermorphins (Mignogna et al., 1992).

The last study (at least as evidenced by my observation) signed by Vittorio Erspamer, at the age of 84, is an important drug-toxicological study done on kambo (Erspamer et al., 1993).

TWAROG M. BETTY & IRVINE H. PAGE, 1953, Serotonin content of some Mammalian tissues and urine and a method for its determination, American Journal of Physiology, vol. 175, pp. 157-161.